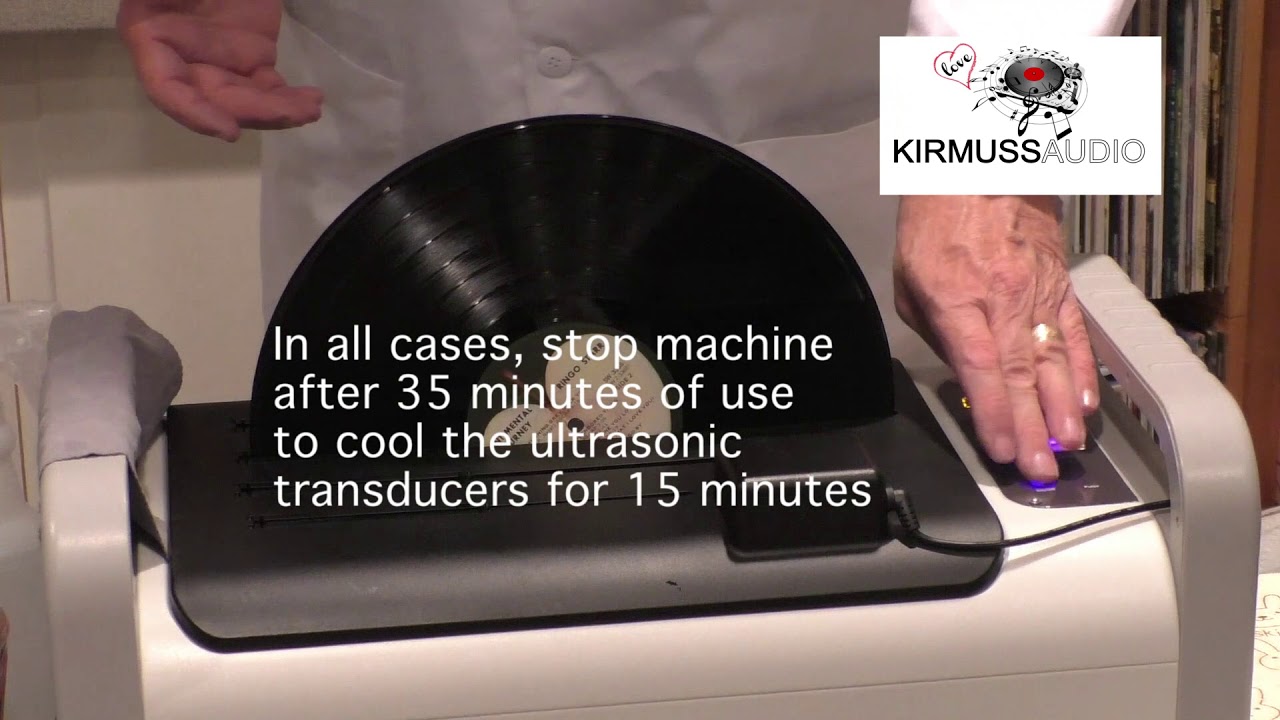 Click here for: System Attributes
Click here for: System Maintenance
Click here for: RMAF Denver 2019 Panel Discussion on Record Preservation
Click here for: NEW VIDEO, FEB 6 2022 : YOUTUBE VIDEO OF THE AUDIOPHILE SOCIETY ZOOM (c) 2022 Kirmuss & Associates , LLC. (All rights reserved) : PRESENTED: GENERIC INFORMATION AND SCIENCE. HOW ARE RECORDS MADE, WHY DO CLEANING SOLUTIONS DO NOT WORK, WHY USE DISTILLED WATER, WHY CAN ONE NOT CLEAN 12 RECORDS MOUNTED ON A SKEWER IN A 40 KHz SONIC, HOW DO ULTRASONICS WORK. WHY CANNOT ONE RESTORE MORE THAN 4 RECORDS WITH THE KIRMUSS PROCESS. HOW DOES KIRMUSS REMOVE THE RELEASE AGENT. SHOWN ARE IMAGES OF FOIL RECORDS TESTED IN A 40 KHz SKEWERED SONIC, A 40 AND 120 KHz SONIC AND PROOF OF SAFE AND EVEN KIRMUSS SONIC ACTION ON TEST ALUMINUM RECORDS WITH PROOF OF THE RELEASE AGENT THAT BUBBLES UP DURING PRESSING THAT HOLDS DUST THAT THE NEEDLE HITS CREATING THOSE UNWANTED POPS. POPS THAT ARE REMOVED AND NOT HIDDEN USING KIRMUSS RECORD IONIZATION. You can make your own aluminum records to test any ultrasonic and see if it is in fact using cavitation.

LATEST NEWS HOT OFF THE PRESS :

BEST WISHES FOR 2023, THE YEAR OF THE RABBIT! SAL OUR MASCOT IS HAPPY!

1) MEXICO CITY CONSAM SHOW UPDATES:
At the show this past November, KirmussAudio established JMI Audio as its exclusive representative for Mexico. In a highly attended seminar Kirmuss debunked record cleaning myths and explained what record ionization is when combined using an ultrasonic with resonance applied to safely restore record grooves, removing the record's release agent. Demonstrations were supported with aluminum foil records and a cavitation meter to measure the effectiveness and safety of the Kirmuss process as well as demonstrating to audiophiles where most advertised ultrasonic cleaning machines only surface shines records and leave a coating, as most do not even use ultrasonic cavitation as advertised. They are soap bubblers! Thus, they cannot remove a record's release agent (“Pressing Oil” per the Shure Brothers discovery in the 1970's). Explained also why a Kirmuss RESTORED RECORD comes out virtually dry, no air or vacuum drying is needed, this as the release agent once removed sees the PVC record and water having the same electrical charge repell each other.
Proving the explained theory, music enthusiasts brought in records for restoration, where before and after Kirmuss processing measurements and auditions were made. Margueles Audio, one of the premiere exhibitors and a show sponsor brought in very well used vintage records for restoration. Needless to say, JMI's entire initial inventory was sold out during the 3 days of the show.

As we all love music... At the seminar, reference was made where Kirmuss bumped into Michael Fremer at Big Dipper Records in Oslo, Norway, the month prior, and where Michael presented several sessions on turntable set up, demonstrating how to use some of the Wally Tools alignment devices, as well as played some music restored by the KirmussAudio KA-RC-1 record restoration system. Both products allow audiophiles to hear immediate improvements in sound once used. HEARING IS BELIEVING.

In Mexico Kirmuss also demonstrated where skewered records, 6, 8, 10, or 12, mounted on a DIY style rotisserie with motor and suspended in a 6 to 7 liter ultrasonic tank of any manufacturer that does use cavitation sees uneven cavitation, if at all, depending on the position of the record on the skewer. This uneven coverage on the records is caused by reflected standing waves. Explained where these devices are sold mainly by jewelry, dental and metal sonic cleaning machine manufacturers/resellers.

The audience were cautioned also about cleaning solutions. Some use blue liquids that see Ether as the key ingredient, not PVC Friendly per the PVC Chemical Compatibility Chart. This mention was made as for decades, vinyl enthusiasts have been misled by a plethora of cleaning remedies and myths that, in fact, may harm both the record and the audiophile!

THANK YOU FERNANDO AND HIS TEAM OF VOLUNTEERS FOR AN OUTSTANDING SHOW!
If you missed these sessions:
Charles Kirmuss will be present at the Tampa Florida Audio Show in February. You may catch his Master Class Analog Theatre sessions in the same room as JR Boisclair of Wally Tools: Both speakers offer an educational insight into general record manufacturing and tone arm/cartridge manufacture. KNOWLEDGE IS POWER!

2) NEW VIDEO LINK, CLICK ABOVE: Audiophile Society Zoom. Feb 6 2022. EVERYTHING YOU NEED TO KNOW ABOUT RECORDS, THEIR CARE, AND USING TRUE ULTRASONICS.

ALSO VISIT OUR YOUTUBE CHANNEL. KIRMUSS AUDIO. RECORDED IN SEOUL KOREA AT OUR DEALER'S LOCATION NOVEMBER 2022, POSTED ARE 5 STEP BY STEP VIDEOS ON USING OUR SYSTEM!

In Michael Fremer's Analog Corner, August 2022, Stereophile Magazine, he questions the matter of record cleaning and care, suggesting there be standards. Just as J.R. Boisclair of Wally Tools has disrupted myths surrounding tone arms and cartridges and their alignment, so has KirmussAudio, presenting evidence as to testing of various record cleaning machines and processes. Many sold as ultrasonics do no use cavitation. As to records, at the DC show, Kirmuss restored used records from visitors that were initially surface cleaned and shined by vacuum cleaning systems, measured was on average a1.8 dB gain over floor after processing using the Rowland Design Capri S2 preamp.

Proven, using digital microscopy and signal analyzers, only does the Kirmuss Process remove films left over from prior cleaning methods used as well as the pressing oil that surfaces during the record manufacturing process.

The Keyence VHX-7000 digital 2D/3D microscope is used to see dirt and dust caught in the pressing's release agent that surfaces to allow the "hot" record to "pop out" of the stamper, heard as a pop in a new record. The microscope measures the reduced height of the groove where the release agent has been removed.

With the "pop" removed by the Kirmuss process, a net increase in signal over floor is measured depending on the provenance of the record, this measured using signal analyzers, Shure and Ortofon Cartridge testers, and VU meters. ..and your ears! (Before and after measurements taken).

With release agent and any films left over from air or vacuum drying removed, this increases the imagery, soundstage, and timbre of the record, it's like seeing your needle ride the stamper!

As to the myth of ultrasonic frequency: The Kirmuss KA-RC-1 uses a 35 KHz, 810 Cavin measured even ultrasonic signal throughout the tank, which is modified with a passive resonance of 70 KHz to even out the known uneven effects of cavitation. Mentioning “wattage” on a product data sheet has no meaning. Rather, pressure needs to be measured throughout the tank to see even effectiveness between records from record's edge to the dead wax area. This as where ultrasonic transducers produce an audio signal which when coupled to a stainless steel metal tank then excites the liquid that it makes contact with, creating microbubbles that rise, which in turn implode unevenly, causing that uncontrolled “plasma wave”. The closer the records are to each other, standing waves negate the effects of cavitation. As dust, dirt and fungus are 3 to 5 microns in size, they are removed easily by a 35 KHz base sonic signal. The 40 KHz and especially 120 KHz and higher frequencies while they, to the layperson, create a smaller bubble size with increased velocity as a result of cavitation, to the contrary assumption, these are not destined and known to easily remove dirt and dust of 3 to 5 microns in a 6 to 35 micron “V-shaped” groove. Rather, these higher frequencies are best suited to be used on items of greater detail than those found in a record's groove. The 120 KHz range sonics if they do use cavitation are therefore destined to better remove the smaller sub micron 0.05 bacteria found in the manufacture of silicon chips, substrates, spacecraft borne items, especially bacteria found in endoscopic cameras and medical instruments. Not dirt and dust in record grooves. Further: Bacteria do not affect the needle picking up music and the detail pressed by the stamper. To 25 KHz machines as used by many DIY enthusiasts with those notorious rotisserie skewers assemblies: known for their annoying loud noise, they are best suited for removal the removal of oil and grease.

Q: How many records can I clean with one "bath"?

A: You can clean two 33 1/3, one 45, and one 78 at the same time. The spacing between the records is crucial to the process, any larger number of record within the same space reduces the advantage of the ultrasonic that works the surfactant into the record grooves.

To the bath: We suggest you change out the distilled water with the 1.4 ounces of 70% IPA in the tank after restoring between 15 to 20 records or when the water becomes murky. Severely contaminated records will show up with murky water in the tub. Do not let the water stand in the restoration system overnight. It will grow fungus once the alcohol has evaporated. Please discard.

Q: How long will that Surfactant bottle last before I need to replenish it?

A: You should be able to clean between 100 and 150 records before requiring a new spray bottle. (60 mL). The number of applications depends on the number of 5 minute cycles that you require to restore the record. Eight applications would see less records restored, around 60.

Also available: a 300 mL refill bottle. This is approximately 20% lower in cost. 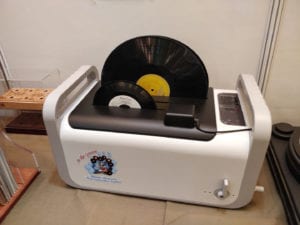 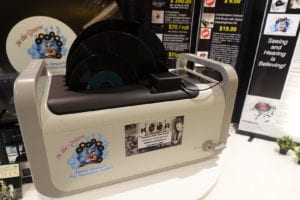 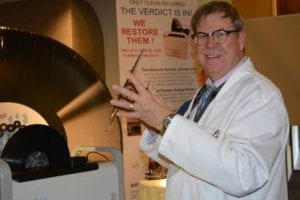 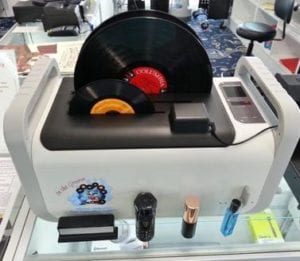 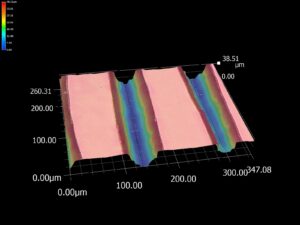 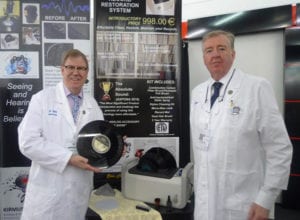 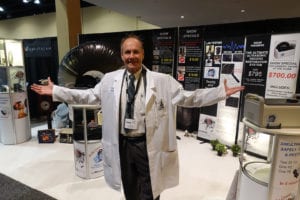 "...To say that I was pleased with the performance of the Kirmuss was to issue a laughable understatement. The KA-RC-1 not only removes troublesome  noise efficiently, to give new life to your vinyl, it also provides a level of sonic transparency that is truly astounding. Once you hear the effects yourself, you’’ realize that you’ve never actually heard your record collection.

"I have to declare that the KARC-1 is the best record cleaner on the market. Bar none.​"​

"The Kirmuss KA-RC-1 is the best commercial ultrasonic cleaner currently available on the market."

"Kirmuss Audio’s "In The Groove" Ultimate Ultrasonic Vinyl Restoration System makes the process of using this technology more affordable. You can RESTORE your 33 1/3, 45's and 78's simultaneously!​​"

The Kirmuss system should not be seen as simply a record cleaning machine, it is a professional grade archival system that has been made affordable to anyone wanting to preserve or restore their vinyl collection and as such thoroughly deserves

"Billed as a record groove restoration system (and not a record cleaner), You will be rewarded with a better soundstage and truer instrumental timbre". " As such receives Absolute Sound's EDITOR's CHOICE AWARD".

"I wholeheartedly endorse the Kirmuss System” ;   “Best of all when I played it, (after record restoration),  HOLY CRAP! “.  “ The top end fully restored, the backgrounds were super quiet, transients were sharpened, the inner detail in Peter Townsend’s rhythm guitar strings (Tommy). ...  produced an almost new listening experience."

MICHAEL FREMER, "Dr. Analog to many."

“Dr. Kirmuss, I want to share my absolute delight and astonishment with your system.  Over the past five decades I have used many DIY and professional cleaning systems ,.none of those systems have come close to the sonic benefits I am experiencing with this system, …it is like opening a window, simply dramatic. What I now hear from them is a revelation. This cleaning solution is simple, effective and impactful.” Thank-You, Kind Regards,

A “best buy” for the benefit of ultrasonics to restore LP sonics to their potential!
×