An Affordable Solution To Maintaining And Restoring Your Vinyl Collection:

After 5 years of extensive research and trials audiophile and business owner Charles Kirmuss developed an affordable and simple to use RECORD CLEANING AND RESTORATION SYSTEM based on researching the record making process and the environments that records are stored in.

With ETL C US and CE Electrical and Safety Approvals our affordable system will increase your listening pleasure by removing most of those annoying unwanted pops and crackling sounds from both new and old records and giving breath to the artist and music as fungus as well as remnants of prior cleanings which are stripped off the record.

This is NOT some home-made product!

First and foremost; our Patented and Patents Pending record suspension system assures that records of any speed and size see their grooves cleaned SAFELY. No damage to the record by mechanical intrusion of skewers and the like. FOUR RECORDS AT A TIME MAY BE PROCESSED. 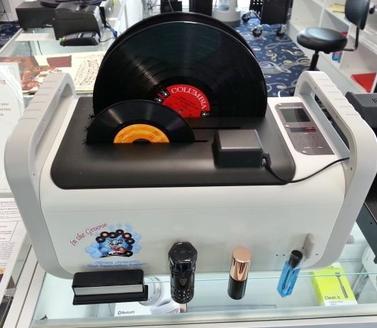 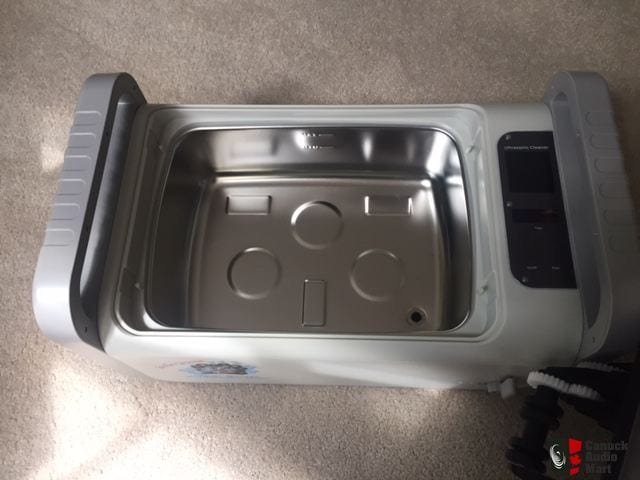 Secondly; only distilled water with a maximum of 40 mL (1.4 oz) of ISA (Isopropyl) 70% solution constitutes the initial de-grease bath. IT DOES NOT CLEAN THE GROOVES.  Only in the first 2 or 5 minute  initial cycle does this remove surface dust, fingerprint oils, sand..  In subsequent RESTORATION CYCLES we then apply a PVC FRIENDLY, WATER SOLUBLE, anti-bacterial, anti-fungal and anti-static  Ionizing Surfactant spary onto the record. When brushed in using the supplied goat hair brush, the application now changes the charge of the record with relation to the water in the ultrasonic's tank.  ...Thus starts the groove cleaning and groove restoration process.  The 500 MPH (805 KPH) plasma wave created by cavitation is now attracted to the both the record and the record's groove. (Patents Pending).  With the plasma wave now brushing against the applied surfactant, this now first  removes accumulated surface contaminants present from other cleaning systems and processes.  Then as we process the records in multiple cycles, ( of 2 or 5 minutes),  we then finally remove the release agent found below and the contaminants that were microwelded into the grooves by the heat of the needle that were causing those unwanted pops and crackles.

Ultrasonics need an ionizing  surfactant to aid  the plasma wave to be attracted to the record, as vinyl typically repells water. Without this, groove restoration and cleaning may not occur.  DO NOT USE OUR SURFACTANT WITH OTHER ULTRASONIC SYSTEMS AS PERMANENT DAMAGE TO RECORDS MAY OCCUR.

As to determining when a record is clean and restored, our process allows you to see this first hand. As the surfactant is brushed onto the record and into the grooves over multiple 2 or 5 minute cycles, a  rise and then fall or decrease of the appearance of a toothpaste-like substance that has been brought up by the goat hair brush of materials that were softened by the prior cycles of the ultrasonic cycle process is seen: this  validates the effectiveness of the system: removing fungus, contaminants, as well as agents applied in prior cleaning methods and systems. The Last Cycle is determined  when these materials rapidly evaporate or diminish in quantity. 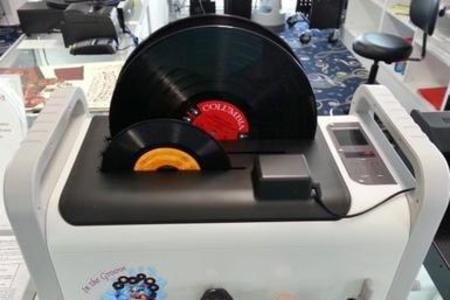 For the 120 VAC US Model, at a list price of $970*, everyone can enjoy their collection and restore and maintain it.

No matter how you store and use your records they inevitably will require maintenance. When playing records, dust particles and contaminants always build up on the stylus as the tone arm moves across the record. This dulls the sound. Then, if a release agent has not been removed, any dust  particles in the record's grooves  will be microwelded into the agent, resulting in those nasty "pops".

As to record health:  Even new and latest pressings are subject to the same conditions as your old collection.

Release agents are found on the record as a residue from the pressing process and must be removed prior to use, otherwise they attract at an alarming rate dust and other airborne contaminants. Heat generated by the contact of the stylus with the record will see micro-dust particles lodged in the grooves. (Then Microwelded into the release agent)

As to release agents themselves as an explanation, there is not a spray that is applied to the pressing machine's surface or stampers.  Rather, as the PVC with plasticizers, stabilizers and liquifiers are  added in the mix that are used in the record pressing and as they are heated, a type of scillic acid forms. It is during the pressing process with heat, this release agent then bubbles up to the record's extremities and surface which by design aids in the release of the pressing from the stamper's mother and son.  This is the residue that we recommend being removed before a new record is played. It is here where in old records, dust particles and the like have been microwelded into by the heat of the needle. This then allows us to RESTORE old records to their "breath" and "magic".

Regular cleanings are recommended as continual maintenance and care of your records which in turn will reduce those unwanted pops and augment your listening pleasure. With release agent removed: Use a felt brush to remove dusdt and a carbon fiber brush to remoive dust and static. Keep restored records in our HDPE non PVC 4 mil anti-static, anti-fungal sleeves.  Store vertically. Use our process once every 2 or 3 years after with a 2 minute cycle.

Cleaning WILL NOT remove unwanted sounds caused by scratches on the record's surface and depending on the age and condition of the record; even repeated cleanings may or may not restore the record to like new condition. BUT WITH GROOVE RESTORATION we now realize BETTER GROOVE CONTACT BY THE DYNE OF THE NEEDLE WITH THE GROOVES, and with Release Agent removed, light surface scratches are no longer an issue. We have noted where in 7 or 8 times out of 10 a "skid mark" from a tone arm that crossed the surface of a record may no longer be heard once we have processed a record with our system. ... as the needle is now better "seated" in the "pocket" of the groove.

Not knowing the provenance of the record, in some cases our process will not remove all the pops and crackles but it will reduce the overall undesirable effect previously described. The record now is "listenable" and "enjoyable".

Frankly speaking, there is much nonsense published regarding the cleaning of records...

Soaps, chemical mixes and brews, and especially the use of large portions of alcohol, etc.. Did we mention TERGITOL, PHOTOFLOW?

These all affect the record negatively either during or after cleaning.

As used in ultrasonic, manual, or vacuum record CLEANING systems, air drying or blow drying of chemicals or purported cleaning agents that are not physically/"mechanically" removed further creates issues that are cumulative over time. ..as well as introduction of static.

These coatings, we term them as "left over residues", see the needle ride higher in the groove and not make full contact with the left and right channels. 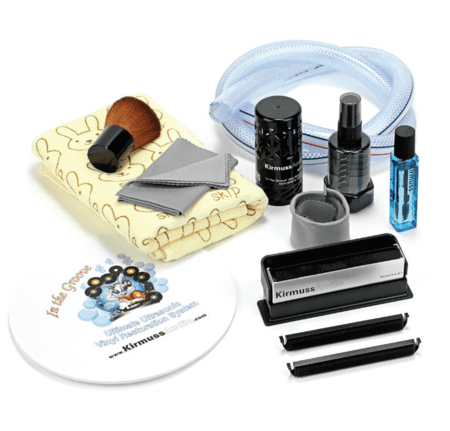 This creates two issues: some of these agents actually are enzyme based and promote fungus, the enemy of the record, and while perhaps records are in fact glossy and shiny these processes remove some of the annoying pops as the needle rides higher the high frequencies and timber of the music becomes "masked".

Gone are the breath of the artist, and the soundstage.

The ultrasonic cleaners have been around for decades and its use and attributes are well known and while care must also be taken as to the introduction of chemicals in the ultrasonic bath, this cleaning technology is a very valuable tool to use.

But ultrasonic alone is not enough. Our concern is two fold: removal of the release agent on a new record; removal of fungus as well as the many layers of previous cleaning system residues: THUS RESTORING THE RECORD.

We differ from other Ultrasonic cleaning machines currently on the market in how we handle the record itself.

Properly spaced, records float safely and are not speared or squeezed, temperate distilled water bath, using water soluble and PVC safe surfactants.  WE SUGGEST NEVER TO  USE A CLEANER IF THERE IS NO DESCRIPTION AS TO THE MAKE UP OF THE CLREANING AGENT. IF THERE IS A LIST OF INGREDIENTS, CONSULT  A  PVC CHEMICAL COMPATABILITY CHART TO SEE IF ANY OF THE CHEMICALS SUPPLIED MAY AFFECT THE HEALTH OF THE PVC RECORD. Our  anti-static, anti-fungal ionizing surfactant is a diol-1-2 - 178 propaneol, safe for PVC.